Modernizing Mexican Moonshine: The Future Of Bacanora In Sonora And Beyond

Producers of the Sonoran spirit look to tradition, economic viability and sustainability amid the hope of a growing market for the agave drink. by Kendal Blust, Fronteras Desk Tweet 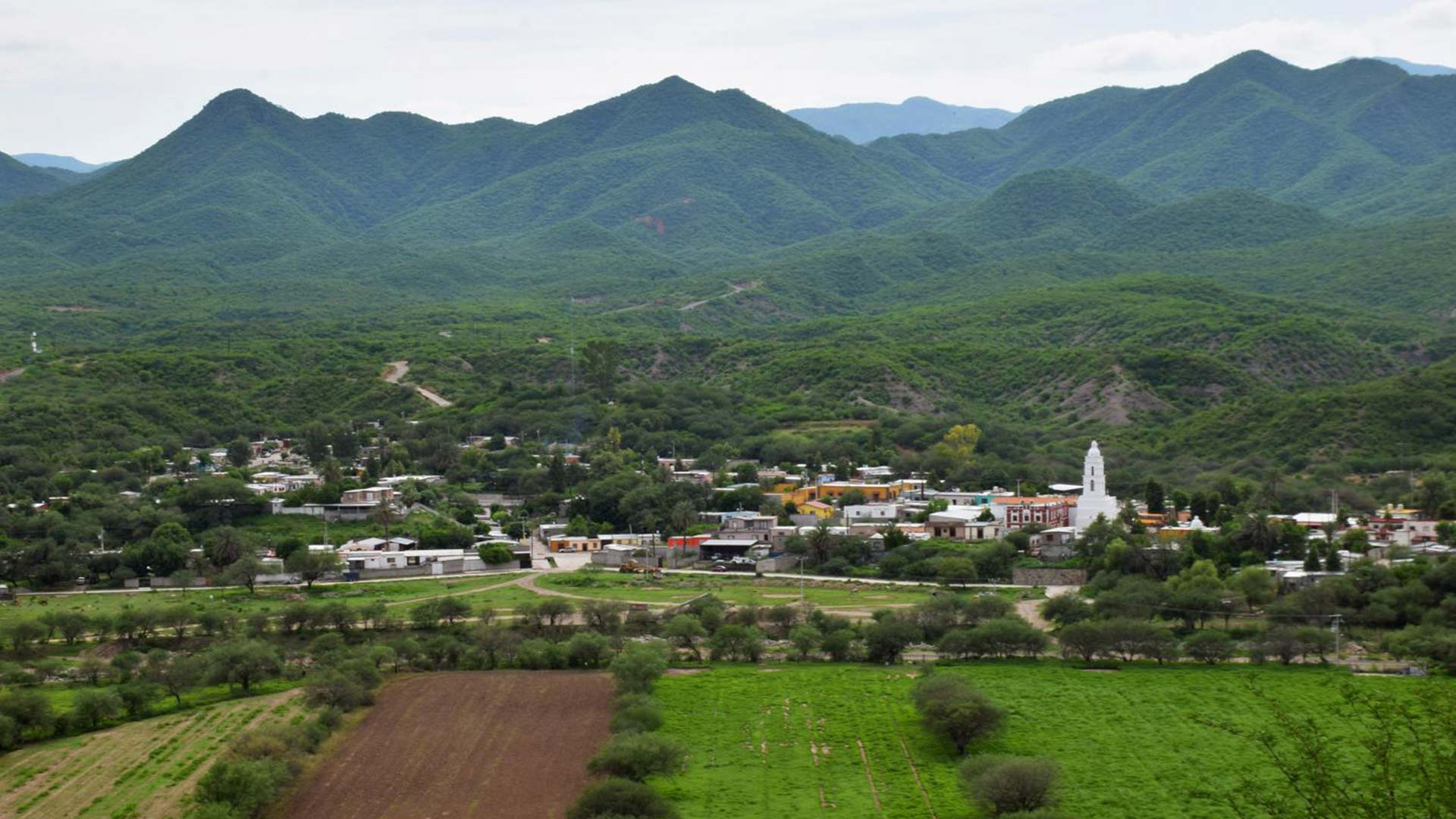 The little town of Bacanora, tucked into the foothills of the Sierra Madre Occidental in eastern Sonora.
Kendal Blust, Fronteras Desk

Inside an old red-and-white brick building in the center of the small town of Bacanora, Sonora, Julián Urquijo and Manuel Chacón heave giant wooden clubs in tandem, crushing roasted agave hearts in a wooden trough they call a canoe.

Their ancestors crushed agave like this for centuries, then fermented and distilled the mash into a regional liquor, bacanora.

But even here in the town of Bacanora, you’d be hard pressed to find someone who makes it that way anymore.

“This was one of the hardest parts of making bacanora,” said Chacón, a local rancher and bacanora producer, and a native of this small Sonoran town tucked into the vast green foothills of the Sierra Madre Occidental mountain range. “It required a lot of force, and it was the part nobody wanted to do.”

So, over time, axes replaced the heavy wooden bats. And these days some producers use wood chippers to rip apart the agave hearts, or piñas.

It’s one of many changes to the labor-intensive process of making bacanora. And some worry that as producers continue to formalize their production, these changes could alter the essence of the lightly sweet and smoky liquor native to this region of northern Mexico. 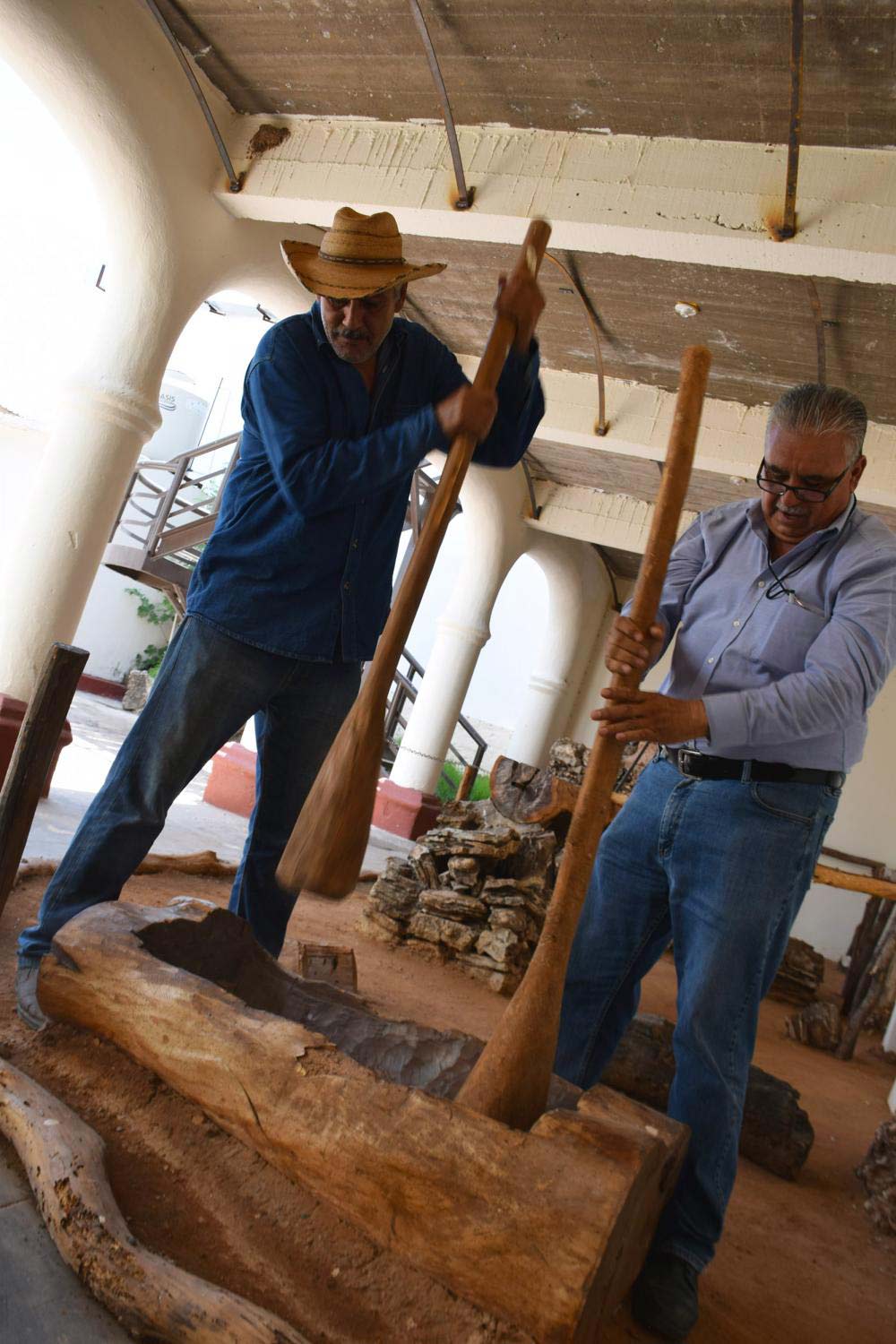 VIEW LARGER Juan Urquijo, left, and Manuel Chacon demonstrate how their ancestors used to mash agave with wooden bats in a trough they call a canoe.
Kendal Blust, Fronteras Desk

Bacanora started as rough fermented agave heart made by the indigenous Opata people. It was harvested from the wild, roasted with mesquite wood in earthen pits, then mashed and left to ferment. Then about 400 years ago, Spanish priests introduced distilleries that softened the drink and made it popular throughout Sonora.

Chacón said the drink started to be called bacanora because lots of agave grew near the town of Bacanora — founded by Spanish Jesuits in 1627 — and the best liquor was made there.

But in 1915, then-governor of Sonora, Plutarco Elías Calles, enacted prohibition laws that sent bacanora production underground for the next 77 years, until 1992.

“So that was a big wall bacanora faced,” said Alberto Navarro, a Mexico City-based expert on agave distillates.

He says while its better-known cousin tequila was becoming internationally recognized, bacanora producers were still being persecuted — and sometimes killed — for making their moonshine. But that’s changing.

“They have actually sorted out all of these challenges in a very, very effective way. So for me, I don’t see why bacanora shouldn’t be growing importantly if the right path is found,” he said.

He thinks bacanora can be competitive in those same international markets that have embraced tequila and more recently mezcal.

For one thing, bacanora has had a denomination of origin since 2000. That means it can only be made and sold from 35 of Sonora’s 72 municipalities — areas where it was traditionally produced. And it has to be made with just one local type of agave: angustafolia haw.

And now, Bacanora received a new certification in June that will help producers sell the spirit internationally by certifying that their products are authentic. 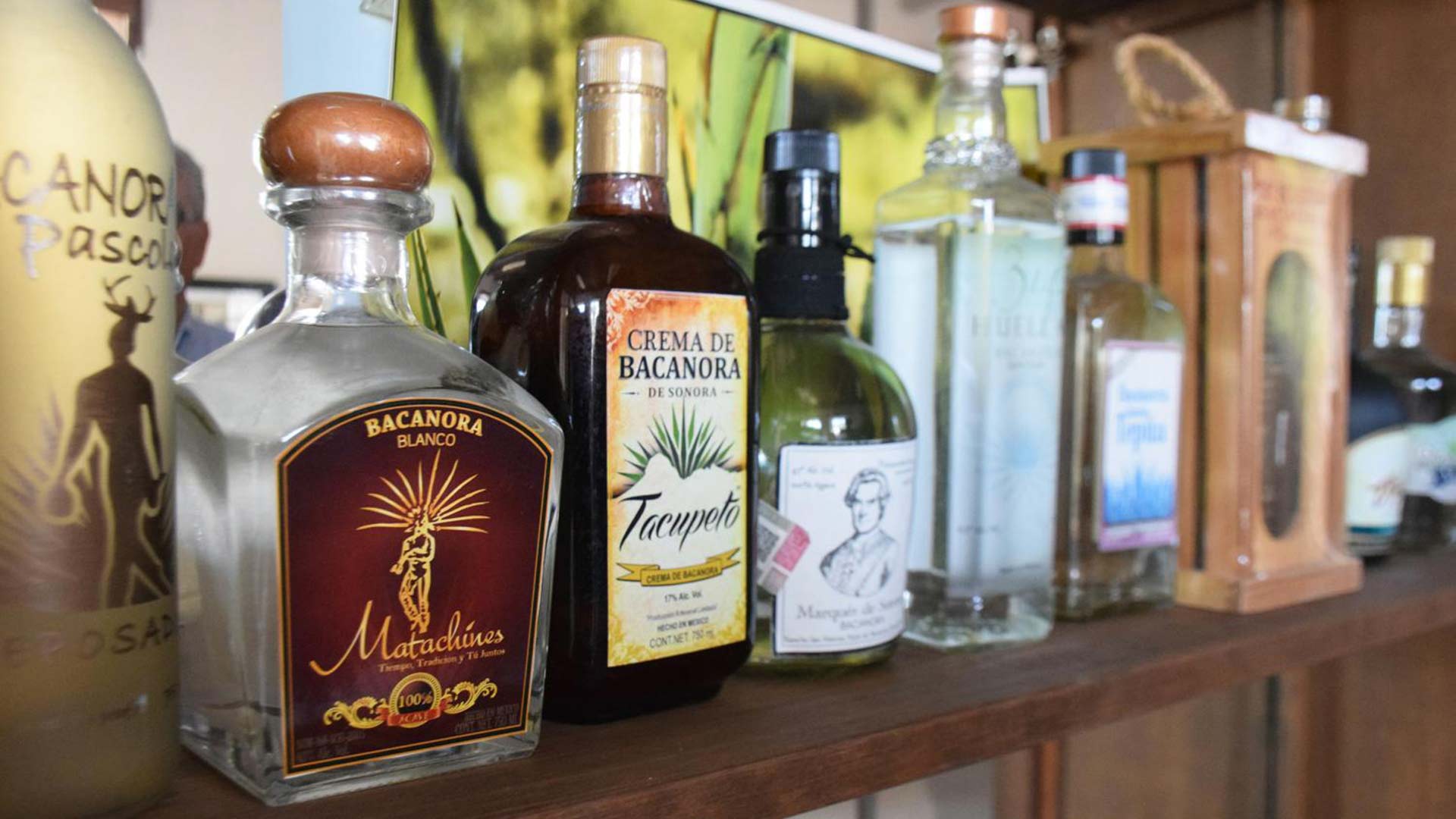 A few brands of Bacanora inside the Bacanora Museum.
Kendal Blust, Fronteras Desk

Doug Smith owns the coffee shop Exo Coffee Roast Company in Tucson. But he’s also passionate about bacanora, which he sells at the mezcal bar he opened at Exo last year — coffee by day, mezcal by night.

“The soul of Sonora is in the spirit, and I think you can taste that,” Smith said of bacanora. “It’s sort of the desert in its different dimensions — tastes like it comes from arid lands. ... And again, it’s Arizona-Sonora’s, it’s our mezcal.”

He says right now there’s only one brand of bacanora available in Arizona, and he’d love to offer a wider variety of the Sonoran spirit at his mezcal bar. But not at the cost of losing its artisanal quality.

“The soul of Sonora is in the spirit, and I think you can taste that. It’s sort of the desert in its different dimensions — tastes like it comes from arid lands.”

“I think it’s worth doing, it’s really worth doing, but it needs to be done carefully,” he says. “The more artisanal route instead of the industrial route. That’s going to be the conflict in the future of bacanora, I think.”

He says while bacanora producers are trying to get in on the booming mezcal market, if they want to sustain a high-quality product that will be able to find its own niche, they can’t lose the traditional production practices that make bacanora special and reflect its fascinating history. 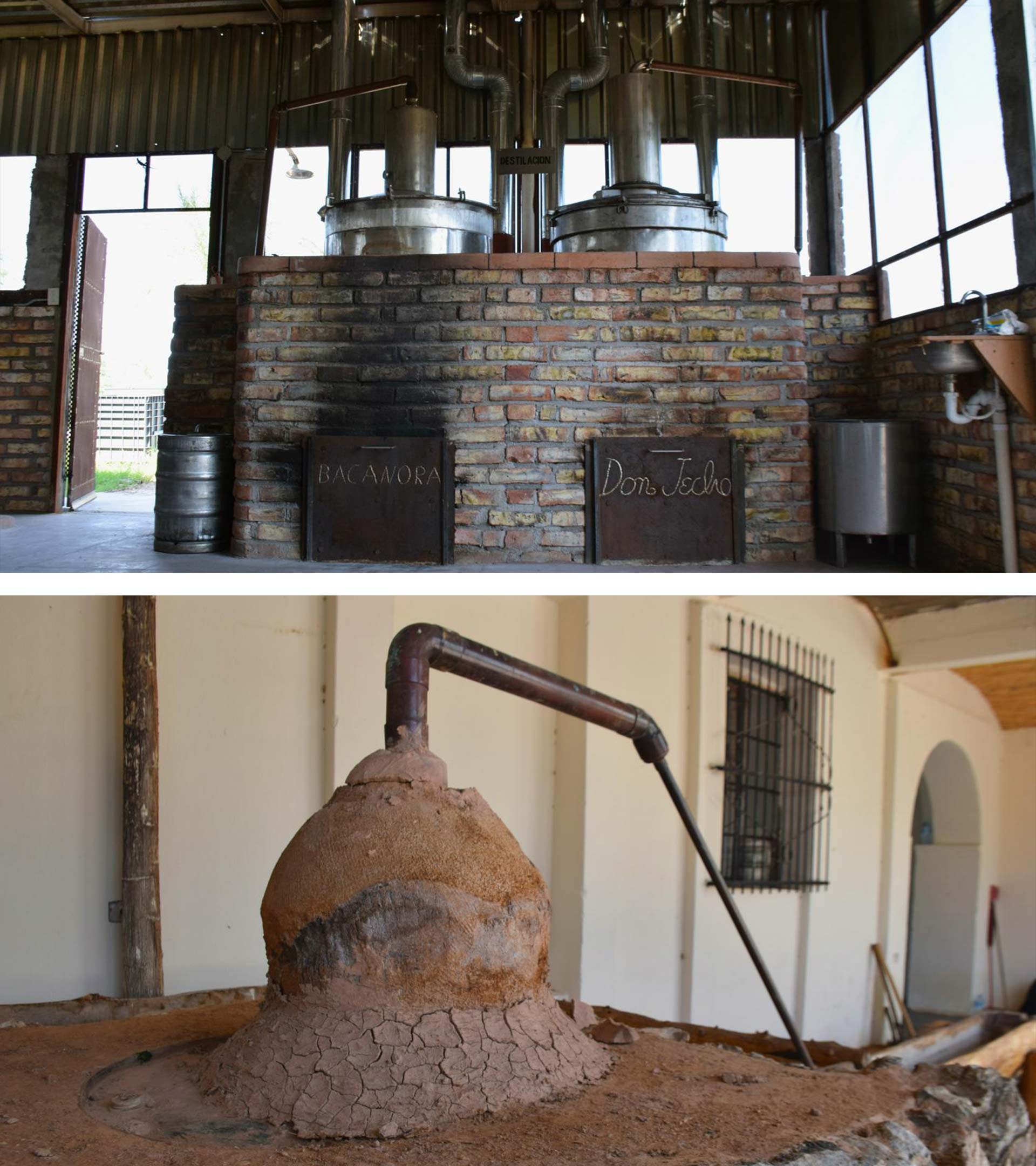 Back in the town of Bacanora, Chacón has modernized his distillery, or vinata. He’s moved production into town. A machine crushes the roasted agave, and a shiny copper still has replaced the typical pot-still plastered with mud out on his ranch. But he insists that his production will always be artisanal.

“Sure, it’s possible that some producer with the goal of lowering costs and making his bacanora more cheaply might try to do it in an industrial way,” he says. “But he’s taking his own risk. The rest of us always want our bottles to say 100 percent agave and artisanal.”

That’s what gives the liquor its special taste and what will make it valuable on the international market, he says.

And Chacón wants to be profitable. He sees bacanora as a path to development in his and other rural communities in this region.

“Most people make [bacanora] as a tradition, as a form of subsistence,” he says. “What I’m doing is creating a business. A business that’s just starting to form.”

A few blocks away from Chacón’s distillery, his friend Julian Urquijo makes the liquor in a corner of his yard just up the hill from his family’s chicken coop. He continues to use a rustic still, and has a long way to go if he wants to formalize and sell in the United States, he says. But that’s the goal.

They’re turning bacanora making into a business. And they dream of creating a thriving industry that will provide jobs and decent living for people here. 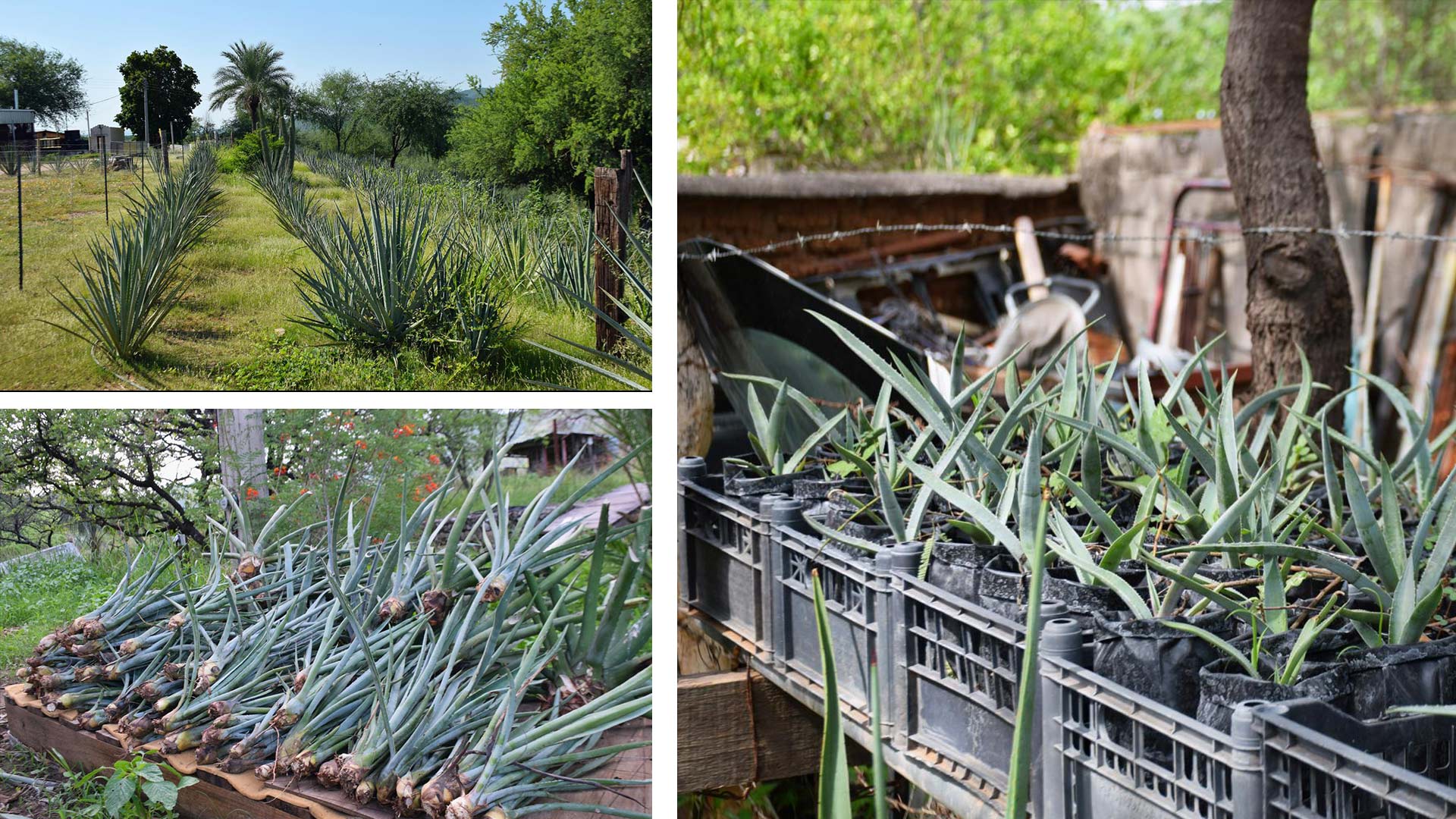 Clockwise from left, Julian Urquijo grows agave in his yard; rows of agave at Rancho Canoas; hijuelos, or agave sons, are used to sprout larger plants that will be transplanted for farmers starting to cultivate agave.
Kendal Blust, Fronteras Desk

But keeping their traditions isn’t the only challenge bacanora producers face. They have traditionally relied on agave they collected from the wild to make the spirit, but that supply is running out.

On a vast cattle ranch on the eastern edge of Sonora, sprinklers drizzle onto seemingly endless rows of tightly packed agave seedlings. It’s a hot, cloudless day at Rancho Las Canoas, and out here, water is like gold, says Enrique Aguirre.

“If you irrigate agave, even with a small amount of water, if you irrigate, instead of maturing and being ready to harvest in eight or nine years, it’s ready in five or six years,” he said.

Aguirre is the first person to earn a new certification for making the regional spirit bacanora, and he wants his brand Don Jecho to make it to the U.S. market. But he says bacanora makers have to rethink the way they harvest agave if they want to sell internationally.

“People collected agave. They didn’t put other plants in their place. And we began to have deforestation. The agave started running out,” he said. “So we have started our own plantations because we want to repopulate.”

Chacón, back in the town of Bacanora, is also starting to cultivate agave plants. He takes me to his ranch outside of town.

“All of the formal bacanora producers I know, we struggle every year to have enough agave to make bacanora,” he said. “We’re fighting for the raw material.”

We walk through a shaded area where seedlings are starting to sprout up. When they’re big enough they’ll be transplanted to the fields. But Chacón is among only a small handful of producers who have started cultivating. And he’s only in the early stages.

“We need support,” he said. “We can’t do it with our own resources. Actually, until now, everything you see in advances, the producers have done it ourselves, little by little. Piece together a little here. Add a little more there.”

He says the government needs to support agave-growing projects. And some of that support is already on its way.

The Sonoran Regulatory Council for Bacanora recently called on mining groups to start growing agaves. “Last year they gave us 200,000. That plant was given to growers right here in Sonora,” said José Maria Rosas, president of the council. “And now they are going to produce for us 300,000 agave plants this year.”

He explained that the mines are growing agave as part of required compensation for environmental damage. 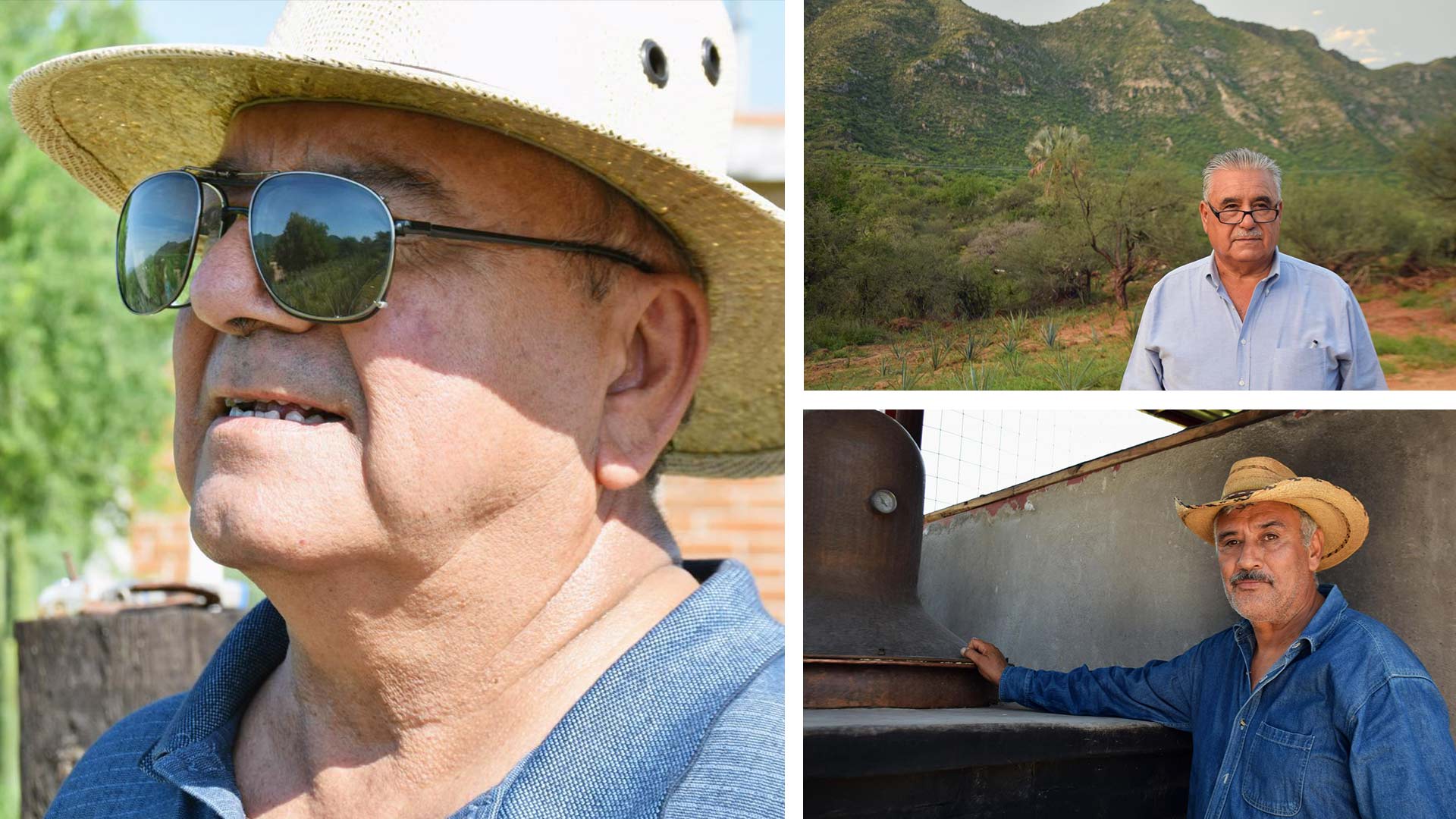 But that won’t be enough to make bacanora truly sustainable, says Vianey Del Rio Guerra. She is studying agave sustainability at the Technological Institute of Sonora.

“We have to create a culture of cultivation of agave in this region,” she said.

But her research goes beyond growing agave. She’s also helping women find ways to reuse discarded agave fiber. And she’s starting a co-op where subsistence farmers can create their own brand of bacanora.

“It’s important that small farmers are able to make it to the market. That they can reclaim their traditional work of making artisanal bacanora,” she said.

And back on his ranch, Aguirre says he thinks there’s a place at the table for everyone when it comes to making bacanora.

“The market, it’s like the sun. The sun shines on everyone, and that’s what the bacanora market is like. There’s some for everyone. There’s plenty,” he said.

“The market, it’s like the sun. The sun shines on everyone, and that’s what the bacanora market is like. There’s some for everyone.”

But he warns that producers have to start investing in a sustainable future now.

But if bacanora is going to be successful in the United States and beyond, he says, it has to become sustainable for producers throughout the region.

'Nothing Will Deter' Catholic Pilgrims Walking to Magdalena, Mexico Sonoran Highway Construction Won't Be Done In August After All Tucson, Hermosillo Beer Makers Work Together to Brew Up Business
By posting comments, you agree to our
AZPM encourages comments, but comments that contain profanity, unrelated information, threats, libel, defamatory statements, obscenities, pornography or that violate the law are not allowed. Comments that promote commercial products or services are not allowed. Comments in violation of this policy will be removed. Continued posting of comments that violate this policy will result in the commenter being banned from the site.