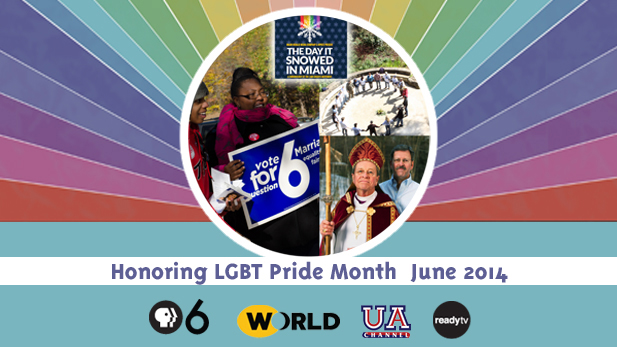 Arizona Public Media presents an extensive lineup of special programming during June in observance of Lesbian, Gay, Bisexual and Transgender (LGBT) Pride Month. From history to performing arts to independent film, PBS 6, WORLD, the UA Channel and ReadyTV offer viewers the opportunity to explore the observances of lesbian, gay, bisexual and transgender history, along with the history of the gay rights and related civil rights movements.

Today, celebrations include pride parades, picnics, parties, workshops, symposia and concerts. Memorials are held during this month for those members of the community who have been lost to hate crimes or HIV/AIDS. The purpose of the commemorative month is to recognize the impact that lesbian, gay, bisexual and transgender individuals have had on history locally, nationally, and internationally.

Over the course of the month of June, AZPM journalists will feature stories relating to LGBT Pride Month. Read about “LGBT Global Persecution Leads to Asylum Seekers in Southern AZ” by AZPM’s Maria Taracena, among others.

Arizona Public Media would like to thank our promotional partners:
[

Mes de la Cultura Continues into Fall Lineup Homepage Announcement Luis Alberto Urrea shares the blueprint for "The House of Broken Angels".
By posting comments, you agree to our
AZPM encourages comments, but comments that contain profanity, unrelated information, threats, libel, defamatory statements, obscenities, pornography or that violate the law are not allowed. Comments that promote commercial products or services are not allowed. Comments in violation of this policy will be removed. Continued posting of comments that violate this policy will result in the commenter being banned from the site.