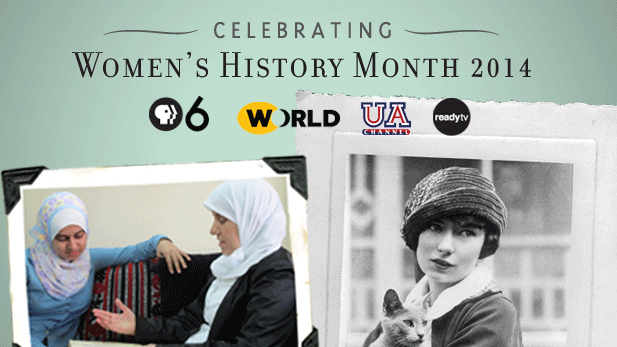 From history to performing arts and independent film, PBS, WORLD, UA Channel, and ReadyTV offer viewers the opportunity to explore the rich, vibrant history, and the political, scientific, social and cultural contributions of women.

Makers: “Women Who Make America,” March 18 – 20 at 11 p.m. on PBS 6
This series shows the different ways in which the women’s movement made an impact across industries—sometimes propelling change forward and sometimes creating new challenges to overcome. The stories are heart-warming, funny, and will entertain, educate and inspire.

POV: “The Light in Her Eyes,” March 21 at 3 p.m. on PBS 6
This documentary challenges many stereotypes about Muslims. In Damascus, the diverse and cosmopolitan capital of Syria—roiled now by uprisings—Habash is a religiously observant wife and mother who wears the hijab head covering. Yet she is also the woman who, going against tradition in her conservative culture, decided to become an Islamic preacher at the precocious age of 17 by opening a Qur’an school for girls in a downtown mosque.

American Experience: “Margaret Mitchell,” March 19 at 3 p.m. on PBS 6
This special reveals a complex woman who experienced profound identity shifts during her life and struggled with the two great issues of her day: the changing role of women and the liberation of African Americans. A charismatic force until a tragic accident led to her death at age 48, Mitchell rebelled against the stifling social

Happy New Year from AZPM The Dave Stryker Quartet kicks off the 2022 Tucson Jazz Festival. Adia Barnes on Teamwork and Motherhood.
By posting comments, you agree to our
AZPM encourages comments, but comments that contain profanity, unrelated information, threats, libel, defamatory statements, obscenities, pornography or that violate the law are not allowed. Comments that promote commercial products or services are not allowed. Comments in violation of this policy will be removed. Continued posting of comments that violate this policy will result in the commenter being banned from the site.